So what are you looking for in a Christmas mystery?

If you’re looking for an atmospheric, cozy mystery then choose something by Canadian writer, Vicki Delany.  Her latest novel, Silent Night, Deadly Night, has a good mystery at its core as the residents of Rudolph (a year-round Christmas community) are subjected to a group of “grinches” who almost kill the spirit of Christmas.  Christmas lives, but one of the grinches does not.

I’d steer away from Leslie Meier’s latest – Yule Log Murder.  A shallower group of characters you’ll never find.  And when it comes to plot? Well, you’d get more satisfaction from reading the back of a cereal box!

abundance in Otto Penzler’s anthology: Christmas at the Mysterious Bookshop.  For seventeen years Penzler (owner of the Mysterious Bookshop in New York), commissioned a Christmas story from a leading suspense writer.  The stories were printed as pamphlets (a limited number of 1000 only) and handed out to the customers as a Christmas present. All seventeen are now contained in one volume and there are certainly some gems amongst them.

L.J. Oliver’s The Humbug Murders is the first book in The Ebenezer Scrooge Mystery series.  Scrooge is tasked with investigating the murder of his former boss, Fezziwig, when Fezziwig’s ghost visits him one night.  The book is peopled by so many of the characters from Dickens’ novels that some simply pop in, make an appearance and then disappear, never to be heard of again.  About the only character we don’t encounter is Madame Defarge! Overstuffed with characters, and a series of repulsive crimes make this a most unenjoyable read.

Merry Christmas and Happy New Year to All.  May you find some great “reads” under your Christmas tree! 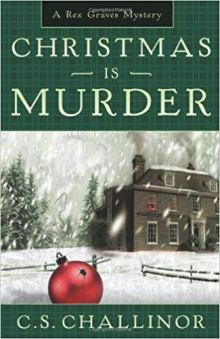 Christmas is Murder
By C.S. Challinor

Rex Graves, Q.C., is invited to spend Christmas at Swanmere Manor, a Victorian hotel in the English countryside, by his mother’s friend, the eccentric Dahlia Smithings.  The other hotel guests reads like cast of characters from a stage play – the tipsy handyman, the newlywed couple, the gay antiques dealer and his partner, the secretive writer, and the femme fatale.

When old Mr. Lawdry is found dead in the drawing room and Rex determines the death to be a murder, the tension amongst the guests increases.  The situation is further complicated when a snowstorm takes out the phone lines and makes it impossible to go for help. When two more people, with no apparent connection to one another are murdered, Rex takes it upon himself to suss out the killer.

Filled with clichés, risqué innuendos, and a few funny moments, this book can help you bide the time if you, too, are snowed in and the phone lines are down!

Don’t take it too seriously – it’s meant to be a bit of a laugh. 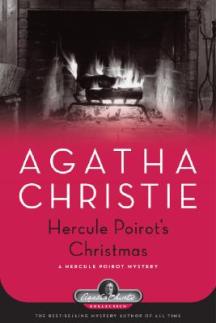 Agatha Christie published this book in 1938.  But the story is timeless. Other than a brief mention of events in another part of the world, one could easily assume that this was a contemporary novel.

Simeon Lee, the patriarch of a family of four, insists that each of his children come home for Christmas.  But don’t think that he plans on playing “happy families”. His intentions are the complete opposite. He does everything to goad each of his children by insulting them and denying their petty grievances and long-held grudges.  Before the first Christmas cracker is even pulled, he’s found bludgeoned to death in his locked bedroom.

When the Chief Constable of Middleshire receives a call about the murder, he asks Poirot, who is spending Christmas with him, to come along while he investigates.  Poirot’s ability to stand back, observe and listen is his forte. It’s not his “little grey cells” (who aren’t even mentioned), that allow him to understand the “human condition”, but his powers of observation.  And it’s always that one word, or gesture, or look that, when observed by Poirot, seals the fate of the murderer.

A more clever mystery you won’t find.  There’s a reason that Agatha Christie is known as “The Queen of Crime” and this novel says it all. 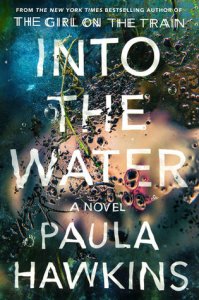 INTO THE WATER by Paula Hawkins

I’m not sure what those people who’ve put Hawkins’ latest book to the top of the bestsellers list for upwards of 7 weeks see in it.  I found it to be confusing, convoluted, and at times even misleading.  The story revolves around the drowning deaths of a number of women in a British town.  It’s believed by the people of the town that the river has some power that draws women to it – magic, or witchcraft – but this point is never fully discussed or explained.

The novel is peopled with so many characters that it’s difficult to keep them straight and I found that I was constantly flipping back and forth in the book to figure out “whose sister was whose” and where “so and so” fit in the family.  Sometimes a character is mentioned briefly and then never appears in the novel again, leaving the reader to wonder what purpose they even had in the telling of the story.

Hawkins sends us off on tangents that leave us shaking our heads and red herrings that take us nowhere.  I’m still trying to figure out what her reference to “Adam and Eve and dinosaurs” is all about!

This novel left me disappointed and unsatisfied, which are the opposite feelings that I had after reading her first novel, “The Girl on the Train”. Give “Into the Water” a miss – there are many well-written stories out there that will be much more rewarding to read than this one. 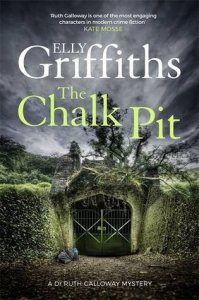 THE CHALK PIT by Elly Griffiths

Ruth is in a good place in her life right now.  Work is going well; her daughter, Kate, is four years old and in school; and Nelson has been able to take a small roll (picking Kate up from school on occasion) in both their lives.  Nelson, on the other hand, is dealing with a new Superintendent – Jo Archer – whose main ambition, it would appear, is to put Nelson out to pasture.

When Ruth is called to investigate some bones found in one of the many chalk-mining tunnels in King’s Lynn, both she and Nelson are thrust into a murder investigation.  Meanwhile DS Judy Johnson is investigating the disappearance of a number of “rough sleepers” (homeless people).

When one of them is found murdered and a woman in the community goes missing under circumstances similar to those of the rough sleepers, the investigation is ramped up.

Then, as so often happens, Ruth’s good luck runs out, leaving her bereft.  Her family has been rocked by sadness and Nelson has given her some upsetting news.  Griffiths provides us with an unexpected twist to the story and I can only wonder where the next book in this series will take us.

If you’re new to this series (Ruth Galloway Mysteries), DO read them in order.  You need the background of each of the characters in order to truly appreciate their relationship to one another.  Between the archeological discussions and the great character development, Griffiths provides us with a cracker-jack read! 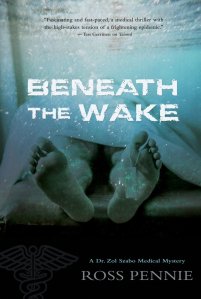 BENEATH THE WAKE by Ross Pennie

It’s fifteen months since Zol’s fiancé, Colleen, was killed in a car crash and he is desperate for a well-deserved rest.  So Zol, son Max, Max’s friend Travis, and Zol’s colleague and new girlfriend, Natasha, are enjoying the high life on the Coral Dynasty, a cruise ship embarking from Perth, Australia, on its way to South Africa.  Zol is hoping that the only worries that he’ll have on this trip will be enforcing the boys to wear their suits and ties at supper each night.

However, that’s not to be.  When members of the crew start becoming sick with a strange affliction, Natasha is quick to offer assistance to the ship’s doctor, Noah Ferguson.  She quickly realizes that the situation is much worse than first diagnosed, and she appeals to Zol to lend a hand.  With limited resources to identify the pathogen responsible for the sickness, the team contact Hamish Wakefield back home for help.  By coincidence, Hamish and Noah attended med school together and worked well as a team.

While they are racing against the clock to identify the cause of the illness on board, Natasha witnesses other disturbing goings-on.  Certain passengers are given “special services” by the medical team and she’s disturbed by what she sees.

Once the pathogen is identified, it’s easy enough to see where this story is leading.

Though not as riveting as Pennie’s other novels in the series, there were some startling surprises along the way.  Still worth the read. 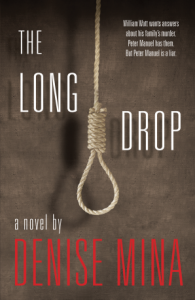 THE LONG DROP by Denise Mina

This is the true story of a series of horrific crimes that took place in Glasgow in 1958.  We know who the serial killer was – Peter Manuel.  Manuel had been on the police’s radar for a long time but they were never able to get “the goods” on him to keep him in prison.

When William Watt is arrested for the murder of his own family but released due to lack of evidence, he is determined to clear his name and willing to pay for any information that will lead to the arrest of the murderer of his wife and children.  Peter Manuel contacts him, agreeing to help.

Mina mixes fiction and parts from the transcript of the trial of Peter Manuel to bring this story to life.  It is gruesome and the crimes are abhorrent.  This novel is a tour de force though most certainly not a story for the faint of heart.