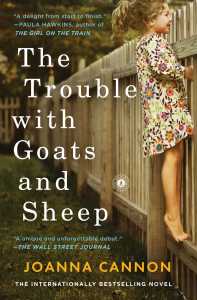 The Seniors Book Club will meet at 2:00 pm on Wednesday, February 14 in the 2nd floor Training Room to discuss the novel  The Trouble with goats and sheep by Joanna Cannon.

England, 1976. Mrs. Creasy is missing and the Avenue is alive with whispers. The neighbors blame her sudden disappearance on the heat wave, but ten-year-olds Grace and Tilly aren’t convinced, and decide to take matters into their own hands.

Spunky, spirited Grace and quiet, thoughtful Tilly go door to door in search of clues. The cul-de-sac starts to give up its secrets, and the amateur detectives uncover more than they ever imagined. A complicated history of deception begins to emerge—everyone on the Avenue has something to hide.

During that sweltering summer, the lives of all the neighbors begin to unravel. The girls come to realize that the lies told to conceal what happened one fateful day about a decade ago are the same ones Mrs. Creasy was starting to peel back just before she disappeared…

“A thoughtful tale of loyalty and friendship, family dynamics and human nature” (Kirkus Reviews), this glorious debut is part coming-of-age story, part mystery. The Trouble with Goats and Sheep radiates an unmistakable warmth and intelligence and is “rife with tiny extraordinaries” (The New York Times Book Review). “Joanna Cannon is an author to watch” (Booklist, starred review).

“An astute, engaging debut” (Publishers Weekly), The Trouble with Goats and Sheep is a quirky and utterly charming tale of a community in need of reconciliation and two girls learning what it means to belong.

An interview with Joanna Cannon

A video interview with Joanna Cannon

The Story behind Goats and Sheep

The Sheep and the Goats in the Bible

Jesus on the Drainpipe story